Functioning primarily in the central nervous system (CNS), neurotransmitters facilitate communication between the brain and the body’s glands, organs and muscles. They are released from neurons and travel across a small space, called a synapse, to reach receptors on target cells. Inadequate neurotransmitter function disrupts the signal to target tissue and has a profound in uence on overall health and well-being. In fact, imbalances in certain neurotransmitters are associated with many of the prevalent symptoms and conditions seen in doctors’ offices today including:

These symptoms are often compounded by the use of bioactive substances including caffeine, alcohol, nicotine and prescription medications that can contribute to neurotransmitter depletion and worsening of symptoms by suppressing or artificially stimulating neurotransmitter receptor function.

If you would like to learn more about ADHD/Cognitive Supplementation Therapy, contact us and we'll get back to you as soon as possible. 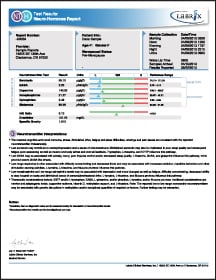 NextGen Compound Pharmacy uses Labrix for our neurotransmitter testing. Labrix sets new standards in laboratory medicine and utilizes HPLC Triple Quadrupole MS/MS technology which is proving to be the most sensitive and accurate methodology for measuring urinary neurotransmitters. Labrix testing is higher sensitivity and has stronger results reproducibility than has been available through other methodologies; this gives you far greater confidence in the reported results. In addition to reliability and accuracy, Labrix leads the pack in terms of guaranteed turnaround times, easy to use kits, clinical support for professionals, and top of the line customer service.

Serotonin is a key neurotransmitter that is involved in the regulation of sleep, appetite and aggression. Serotonin imbalance is a common contributor to mood problems, and pharmacologic agents that alter serotonin levels are among the most commonly used class of drugs prescribed for anxiety and depression.

High stress, insufficient nutrients, fluctuating hormones and the use of stimulant medications or caffeine can all contribute to the depletion of serotonin over time. When serotonin is out of range, depression, anxiety, worry, obsessive thoughts and behaviors, carbohydrate cravings, PMS, difficulty with pain control, and sleep cycle disturbances can result.

GABA is the major inhibitory neurotransmitter found in the CNS and, as such, is important for balancing excitatory action of other neurotransmitters. High levels of GABA may be a result of excitatory overload, or a compensatory mechanism to balance the surplus excitatory neurotransmitter activity. These high levels result in a ‘calming’ action that may contribute to sluggish energy, feelings of sedation, and foggy thinking. Low GABA levels are associated with dysregulation of the adrenal stress response. Without the inhibiting function of GABA, impulsive behaviors are often poorly controlled, contributing to a range of anxious and/or reactive symptoms that extend from poor impulse control to seizure disorders. Alcohol as well as benzodiazepine drugs act on GABA receptors and imitate the effects of GABA. Though these substances don’t cause an increase in GABA levels, understanding their mechanism can give us additional insight into the effects of GABA.

Dopamine is largely responsible for regulating the pleasure/reward pathway, memory and motor control. Its function creates both inhibitory and excitatory action depending on the dopaminergic receptor it binds to. Memory issues are common with both elevations and depressions in dopamine levels. Caffeine and other stimulants, such as medications for ADD/ADHD, often improve focus by increasing dopamine release, although continual stimulation of this release can deplete dopamine over time.

Common symptoms associated with low dopamine levels include loss of motor control, cravings, compulsions, loss of satisfaction and addictive behaviors including: drug and alcohol use, smoking cigarettes, gambling, and overeating. These actions often result from an unconscious attempt to self-medicate, looking for the satisfaction that is not occurring naturally in the body.

Elevated dopamine levels may contribute to hyperactivity or anxiety and have been observed in patients with schizophrenia. High dopamine may also be related to autism, mood swings, psychosis and attention disorders. L-DOPA is a precursor to dopamine, and is used therapeutically for low dopamine conditions such as Parkinson’s disease. These medications can cause elevations in dopamine.

Norepinephrine, also called noradrenaline, is an excitatory neurotransmitter produced in the CNS, as well as a stress hormone produced in the adrenal medulla. Norepinephrine is involved in a wide variety of actions including attention, focus, regulating heart rate, affecting blood flow, and suppressing inflammation. Involved in arousal, it prepares the body for action by relaying messages in the sympathetic nervous system as part of the autonomic nervous system’s fight-or-flight response. High levels of norepinephrine are often linked to anxiety, stress, elevated blood pressure, and hyperactivity, whereas low levels are associated with lack of energy, focus, and motivation.

Norepinephrine, also called noradrenaline, is an excitatory neurotransmitter produced in the CNS, as well as a stress hormone produced in the adrenal medulla. Norepinephrine is involved in a wide variety of actions including attention, focus, regulating heart rate, affecting blood flow, and suppressing inflammation. Involved in arousal, it prepares the body for action by relaying messages in the sympathetic nervous system as part of the autonomic nervous system’s fight-or-flight response. High levels of norepinephrine are often linked to anxiety, stress, elevated blood pressure, and hyperactivity, whereas low levels are associated with lack of energy, focus, and motivation.

GLUTAMATE is an excitatory neurotransmitter and is considered to be the most abundant neurotransmitter in the nervous system. Glutamate is involved in most aspects of normal brain function including cognition, memory and learning, although high levels of glutamate can cause excitotoxicity, a process where nerve cells are damaged by excessive stimulation. Elevated glutamate levels are commonly associated with panic attacks, anxiety, difficulty concentrating, OCD and depression, whereas low glutamate levels may result in agitation, memory loss, sleeplessness, low energy levels and depression.

Health Disclaimer: All information given about health conditions, treatments, products and dosages are not intended to be a substitute for professional medical advice, diagnosis or treatment. This is provided only as a suggested guideline.